UFFR is one of the top organisers for fashion and luxury events that attracts celebrities and figures from the world of entertainment as well as many luxury industries from across the globe, not only to view the collections and purchase the newest designer creations, but also as a major source of exposure for luxury events in partnership with the international yachting community, the Henley Regatta, Polo and equestrian events such as Royal Ascot.

London is an important city for the fashion industry; having produced some of the most recognizable landmark fashion designers and innovators: Vivienne Westwood, John Galliano, Alexander McQueen and Paul Smith. It is estimated that over $130 million of business is generated during London Fashion Week alone, as major buyers use the opportunity to promote designers to global stores with the aim of establishing distribution relationships worldwide. Moreover, London Fashion Week attracts the British Royal Family, with the Queen of England, Elizabeth 2nd making her appearance and giving a sense of prestige to the Fashion Industry.

UFFR was founded by Irina Dobbs in partnership with Russian businessman Sergey Gorkov. It was launched as a representation company in London in 2006, to further promote International fashion. Irina has 20 years of experience in the Fashion Industry, with associated fund-raising, sponsorship and relationship building.

In 2018 Irina had established modelling/acting School “Confidence” in order to discover new talents and to develop diversity in modelling industry. 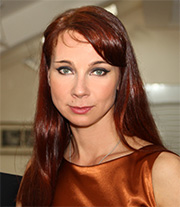